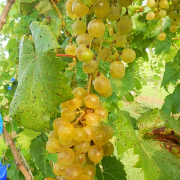 Villard Blanc is a white French-American hybrid bunch grape that was released in 1937 by Seyve and Villard. Currently, it is frequently grown in eastern and southern states as a fresh-eating table grape or for blending in white wine for a light, neutral flavor. Vines have a semi upright growth habit and are vigorous and productive with large loose clusters that fully mature in late July to late September. While it is susceptible to black rot and Powdery mildew, it has some tolerance to Pierce’s disease, at least in the first 10 years of being grown.