Victoria Red is an interspecific hybrid (Vitis spp.) table grape variety with Pierce’s Disease (Xylella fastidiosa) tolerance. Vines are moderate vigor with an upright growth habit. Clusters are large averaging over a one pound with large, seeded berries. Victoria Red was released by the University of Arkansas, Texas A&M University, and Tarkington Vineyards in 2012. 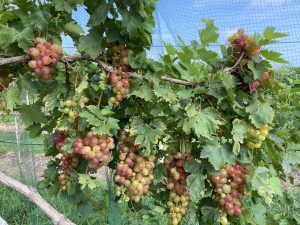 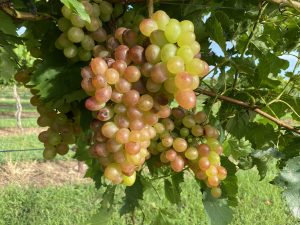 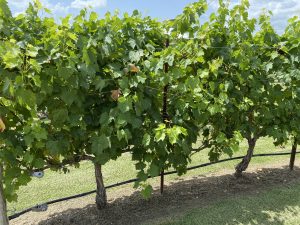 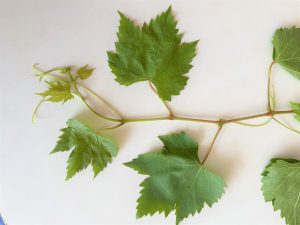 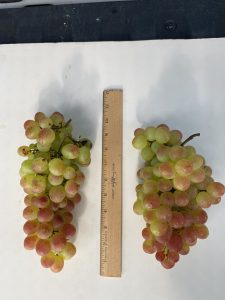 Victoria Red originated from a cross between Ark. 1123 x ‘Exotic’ in 1971 by Dr. Jim Moore. It was tested in Clarkesville, AR as selection Ark. 1475, but was later discarded after it experienced repeated winter injury. In Texas, Victoria Red was successfully grown for over twenty years in the Texas Gulf Coast, an area with extremely high Pierce’s Disease (PD) pressure and in North Texas. It was named and released in 2011.

Victoria Red is fruitful on basal nodes and can be cordon-trained and spur pruned. It is moderately vigorous, but may benefit from grafting as own-root vines can be weak. Victoria Red has large clusters and a high yield potential (Table 1). Leaves are medium-sized, with pronounced teeth on margins. Berries are large and oval, typically containing from 1 to 4 seeds. Fruit maturation is early occurring in mid-July in Texas.

In Texas, vines trained to bilateral cordons and pruned to 2-bud spurs averaged 26 clusters/vine (Table 1). Clusters were large and very loose, with large spherical berries averaging 5.38 g. At the vine spacing used in the trial (8’ x 10’) yield was estimated at 7.44 tons/acre. Victoria Red is recommended for USDA cold hardiness zones 7b and warmer.

Victoria Red berries have a thin, tender skin and a moderately crunchy texture. Fruit has a mild fruity flavor. The seeds of Victoria Red are firm, but palatable. Fruit coloration increases with sun exposure and hang time. Fruit resists cracking from rainfall.