Teroldego is an Italian red wine grape of ancient origin. It has compact clusters with medium to large berries. The berries have high anthocyanin content, even in warm climates, and wines are typically fruity, with soft tannins (D’Agato, 2014). Good fruit and wine quality and adaptability to warm and hot climate regions have increased interest in Teroldego in California and elsewhere. 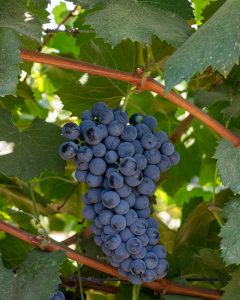 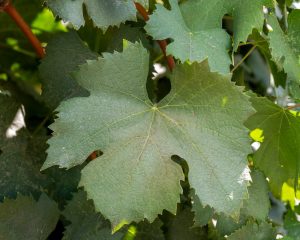 Teroldego is an Italian grape variety of ancient origin, and the most important red grape of Trentino, in north-east Italy (D’Agato, 2014). According to Robinson et al. (2012), Teroldego was named after a place near Mezzolombardo called Alle Teroldege. Teroldego is a sibling of Dureza, which is a parent of Syrah; therefore, Syrah could be considered a “nephew” of Teroldego (D’Agata, 2014). Teroldego is planted throughout Italy, but varietal wines are mainly from vineyards in Trentino. It is also grown in Australia, Brazil, and California.

Teroldego is vigorous, and D’Agata (2014) suggests training it “up high above the ground” to help control its vigor. It is fruitful on basal nodes and can be cordon-trained and spur-pruned. Although the clusters can be big and compact, bunch rot incidence was not terribly high in the San Joaquin Valley. According to D’Agata (2014), it is most susceptible to bunch rots when humidity is high.

In the San Joaquin Valley, cordon-trained, spur-pruned vines produced 10.5 to 13.5 tons/acre in a vineyard where vine spacing was 6’ x 10’ (Table 1). Clusters were medium to large (0.28 to 0.47 kg), well filled to compact, with medium-large spherical to ovoid-shaped berries averaging 1.6 g.). Bunch rot incidence was variable but usually not excessive. Fruit had good anthocyanin content, and pyrazines were not detected (Table 2).

Teroldego grapes are high in anthocyanins and produce dark colored wines, even in warm climates. The wines are also generally fruity, with soft tannins. According to D’Agata (2014), typical wine and flavor profiles for Teroldego wines include ripe red cherry, quinine, ink, tar, and fresh herbs. D’Agata (2014) stated that Teroldego wine can have a “wild, slightly vegetal connotation”, especially when not perfectly ripe, but pyrazines were not detected in fruit from a San Joaquin Valley trial (Table 2). Interest in this variety has increased among growers looking for heat tolerant red wine varieties, and it performed well in a San Joaquin Valley variety trial in Parlier, a hot climate region.