Syrah is a famous Rhone variety that is now grown throughout the world, especially in Australia, where it is known as Shiraz, and is the most widely planted red wine variety in that country. Syrah is considered a versatile variety that can make good wine in a broad spectrum of climates. Syrah may be used to produce varietal table wines of distinct character in cooler districts and has also demonstrated high potential for red table wine production in warmer districts, including California’s Central Valley. Syrah berries tend to shrivel after ripening, and some Syrah selections have a non-infectious genetic syndrome that predisposes the vines to decline. 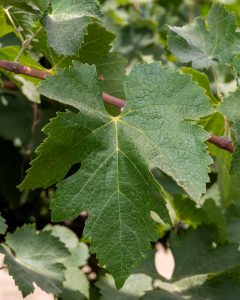 Syrah’s name and synonyms, and resemblance to other varieties, lead to numerous hypotheses as to its origins. However, genetic analyses and historical records strongly suggest that this ancient variety originated in France where it has been grown in the Rhône Valley for centuries. Syrah is possibly a “great grandchild” of Pinot, and its parents are Mondeuse Blanch and Dureza, both of Rhône origin. Some have assumed the name Syrah could be a Frenchified version of Shiraz, implying that Syrah came from there. However, it is more likely that the names Syrah and Serine (a synonym of Syrah) could have originated from the Latin serus, meaning ‘late ripening’.

Nancy Sweet, University of California Foundation Plant Services (FPS) historian, wrote a comprehensive account of Syrah in California (Grapes of Southern France, in: Winegrapes of UC Davis). In brief, Syrah was imported to Sonoma around 1878 as “Petite Syrah”, a name that was also commonly applied to intermixed field blends of southern French varieties. The incorrect and inconsistent use of “Petite Syrah” led to Moreover, early plantings developed a reputation for poor yields, and many were also severely damaged by phylloxera. Harold Olmo introduced “true” Syrah from France in 1936. Other early Syrah selections were imported to FPS (then known as FPMS) from Australia and France, appearing on the list of registered vines for the California Registration & Certification Program beginning in the mid-1970’s.

Syrah is a leading red wine variety in Australia, where it is known by the synonym name Shiraz. That synonym name reflects the now debunked theory that the variety Syrah originated in Shiraz, Persia. “Hermitage” is another synonym for Syrah in Australia, and on the Vitis International Variety Catalogue (VIVC) in Europe. The name Hermitage comes from an estate from which quality Syrah wine is produced in the Northern Rhône region of France.

Clonal selection may be more important for Syrah than it is for some other varieties. A trial at the UC Kearney Agricultural Center in Fresno County compared 10 Syrah clones from the FPS foundation vineyard collection (four Shiraz selections from Australia versus six French Syrah clones). In general, the biggest differences in the clones were between groups of selections, Shiraz from Australia versus the Syrah clones from France (Tables 1 and 2). The Shiraz clones had higher soluble solids, higher pH, smaller berries, smaller clusters (Table 1) and less sour rot (Table 2) than the French Syrah selections. Although all the Shiraz selections originated from the same source vine in Australia, Shiraz 02 was consistently different from the other Shiraz selections in that it always had greater rot incidence. The yield from the Australian selections was generally lower than that from the French clones (Table 2), which was attributed to earlier ripening and shriveling of the Shiraz selections. Shriveling after ripening is commonly seen with Syrah.

Syrah is prone to a decline disorder. Research at Foundation Plant Services (FPS), UC Davis, led to a conclusion that Syrah Decline is a non-infectious genetic syndrome in several Syrah selections and is not caused by a virus. A genetic marker for the disorder has been identified and affected clones are on hold at FPS.

Budbreak is fairly late compared to other varieties. Syrah is vigorous with a spreading habit and tends to produce long, trailing shoots. Yield potential is low to moderate, due to its relatively small berries, medium clusters, and low fruitfulness of basal buds. Syrah is moderately susceptible to powdery mildew, phomopsis, and Pierce’s disease. Young vigorous vines may have overly compact clusters, leading to sour rot. Otherwise, it is not particularly susceptible to bunch rots. Syrah is susceptible to lime-induced chlorosis, and “spring fever”, a springtime nitrogen metabolism disorder the symptoms of which resemble potassium deficiency.

Quadrilateral cordon training can help spread the canopy and fruiting zone in highly vigorous vineyards. Syrah can also respond well to machine-pruning, and higher node numbers may help moderate the growth and increase the yield potential in vigorous vines. Christensen recommended in-row spacing of 6 to 8 feet, and between row spacing of 8 to 10 feet for bilateral cordon training, and 11 to 12 feet for quadrilateral cordon training. The berries tend to shrivel after ripening, leading to weight loss and increased soluble solids (Brix). It is suitable to harvest with canopy or trunk-shaking machines, but over ripe fruit is harder to machine harvest. Timely harvest will help optimize yield, quality, and ease of machine harvest.

Winkler and Amerine, in their seminal work matching varieties with California climate regions, recommended Syrah (called “Petite Sirah, French” in their report) for cool coastal regions, but today Syrah is considered a versatile variety that can make good wine in a broad range of climates. Syrah may be used to produce varietal table wines of distinct character in cooler districts and has also demonstrated high potential for red table wine production in the warmer districts, including California’s San Joaquin Valley. Syrah has good blending qualities including a deep ruby color, high tannin content and, in cooler climates, good acidity. Syrah berries tend to shrivel after ripening, leading to weight loss and rapid Brix accumulation. Therefore, timely harvest is important.