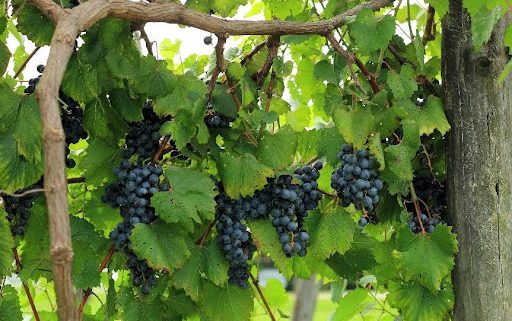 MidSouth is a red grape that was bred in Mississippi. While it has been used to make wine, it is more often used for products like juice, jelly, or jam. The potential exists for wine production, but it may have best utility as a blending grape. It was released in the early 1980s along with two other grape cultivars, Miss Blanc and Miss Blue. It is currently being grown in Mississippi and Texas, but only on a limited scale. In Mississippi the vine is moderately vigorous and productive. It is well adapted to the heat and humidity of the Gulf Coast area. The wine has some susceptibility to anthracnose, black rot, and other fungal diseases, but appears to be highly resistant to Pierce’s disease. MidSouth is highly susceptible to root knot nematodes. 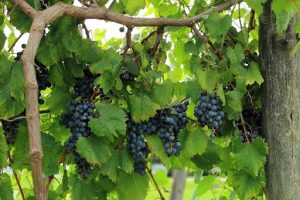 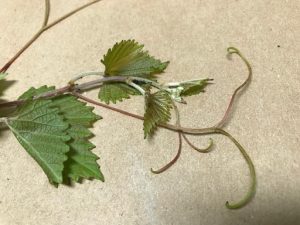 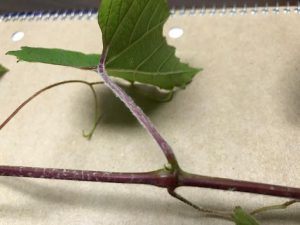 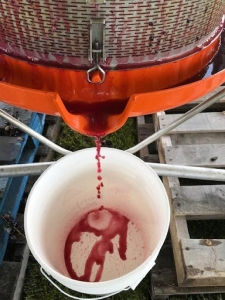 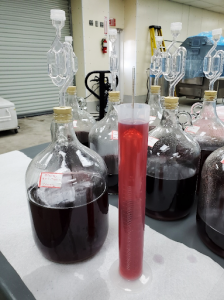 MidSouth, originally tested as Meridian M20-3C, was grown in various vineyards around Mississippi in the 1940s through the 1970s. Vines were grown on their own roots at each of these locations. MidSouth vines did not show symptoms of Pierce’s Disease (Xylella fastidiosa), and their vigor and productivity have indicated resistance to the disease. This earlier assertion was confirmed later, when it was tested for presence of the disease and found negative by ELISA (2016) and RT-qPCR (2019 and 2020). MidSouth rates a 10 (resistant) on the PD-Scale based on its exposure to PD, numerous vectors, and conducive environment in south Mississippi.

MidSouth has self-fertile flowers. It is a moderately vigorous grower with a semi-downward growth habit. Shoot tips turn from green to red and have hairs near the tips. Leaves are somewhat rounded, without deep sinuses, toothed around the edges, and acuminate at the tip. Petioles are long and red. The underside of the leaf and shoots do have light amounts of hair. MidSouth has numerous, strong tendrils that can become woody. Bunches are small to medium sized and loosely compact. Berries are medium sized and will become dark red with a prominent whitish bloom. Chilling requirement for budbreak between 200 and 300 hours below 45 F. Berries have a low susceptibility to splitting, are moderately firm, and are resistant to spotted-wing drosophila (SWD). See figures 2, 3, and 4.

Vines are commonly spur-pruned and trained to a high wire bi-lateral cordon system; however, vertical shoot positioning may be a viable option based on growth habit. Rootstocks have not been tried, so performance on anything other than own-roots is unknown. As no rootstocks have been used previously, typical usage is on own-roots. MidSouth crop loads tend to be moderate. Berries have a distinct “raspberry” flavor and a slip-skin. ‘MidSouth’ has relatively low fruit sugar levels, higher than desired acid, seeded, and some disease susceptibility. Canopy manipulation effects are not well known for this cultivar, but leaf pulling, shoot thinning, and crop load adjustment may be beneficial. Regardless, the bunches tend to ripen evenly and at the same time.It is somewhat susceptible to anthracnose (caused by Elsinoe ampelina), black rot (Guignardia bidwelli) and other fungal diseases, however far less so than other comparable cultivars. The vine often displays magnesium deficiency when a crop load is on the vine, but then abates after harvest. Harvest dates of MidSouth have been from late July to early August in south Mississippi. Sugar content tends to be low from 16 – 18° Brix. Fully ripe MidSouth berries have a mild fruity flavor. MidSouth vines average from 8 to 34 lbs/vine. Acid levels tend to be higher than desired for winemaking. The berry skin is relatively thick and has low susceptibility to splitting, thus it can hang for long periods on the vine. Bunches are not prone to shatter when ripe.The data in Table 1 are averages from several trials in south Mississippi over many years for own-rooted vines. Recent reported ranges for yield per vine and average cluster weight differ substantially from historical documents; however, even earlier reports showed considerable variation in yields from year-to-year. Other reported data are similar.This grape is well-suited for hot, humid environments and is one of the few grapes in the Gulf South that can be grown in a minimally managed way. Well-times fungicide sprays, such a dormant spray and a couple to few cover sprays, can keep disease in check. Combing of shoots is necessary during the season, as well as de-suckering and some tendril removal. See figure 1. Availability of this cultivar is limited. Nurseries in Mississippi and Louisiana are initiating propagation of MidSouth, so limited quantities should be available in the near future.

There is still much to be determined about how to optimize the vineyard management and harvest timing of MidSouth to provide the best wine quality. Experimental wines from MidSouth were made historically and were rated similarly to experimental Concord and Cynthiana wines. Recent experimentation by Mississippi State University in conjunction with a local brewery yielded commercial quality wine, but with higher than desired acid levels. The grapes were pressed and the free-run juice was collected. The juice is a ruby red color upon pressing but lightens to a slight rose color after fermentation. Recent experimental wines allowed skin contact to deepen the red color. Most aspects of producing an optimal wine are unknown.

MidSouth vines grown in Texas (F. Tarkington) during 2010 and 2011 and made into wine had the attributes as shown in Table 2.