Marselan is a red wine grape (Vitis vinifera L.) variety from France that was selected from a planned cross, in 1961, of Cabernet Sauvignon and Garnacha. It was initially neglected because its traits didn’t meet the needs of the industry at the time, but viticulturists came to appreciate its disease resistance and fruit quality, leading to its official release in 1990. Since then, its reputation has only improved, and recent a trial in the San Joaquin Valley of California bolstered its growing reputation for producing high quality red wine grapes in warm and hot climate regions. 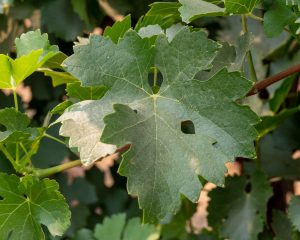 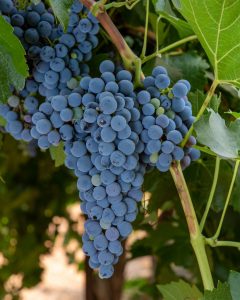 Marselan resulted from a planned cross of Cabernet Sauvignon x Grenache Noir, in 1961 by Paul Truel, an ampelographer and grape breeder at Domaine de Vassal, the vineyard collection of the Institut National de la Recherche Agronomique (INRA) in Montpelier. It is named after Marseillan, a commune on the Mediterranean coast between Montpellier and Béziers, near the INRA vineyard collection where Truel worked. According to Robinson et al. (2012), Truel aimed to create a productive large-berried variety, but Marselan had small berries and was not particularly productive, so it was initially neglected. Marselan was ultimately released in 1990 in response to a demand for varieties that combined good disease resistance with high fruit quality (Robinson et al., 2012). Since its release, Marselan has developed an international reputation for quality, especially in regions with warm or hot climates. In 2021, the Institut National de l’Origine et de la Qualité (INAO) approved Marselan for use in up to 10% of the blend in Bordeaux Superior and Bordeaux AOC wines.

Marselan is fruitful on basal nodes and can be cordon-trained and spur pruned. It has moderate vigor and yield potential (Table 1). Leaves are medium, waxy, five-lobed, with an overlapping petiolar sinus. Clusters are conical, shouldered, moderate in size, with small spherical to oval berries with significant bloom (waxy coating).

In the San Joaquin Valley, vines trained to quadrilateral cordons and pruned to two-bud spurs averaged approximately 99 clusters/vine (Table 1). Clusters were small to medium in size (0.16 kg), well filled, with small oval-shaped berries averaging 0.8 g. At the vine spacing used in the trial (6’ x 10’), yield was estimated to be equivalent to 14 tons/acre.

Marselan can produce wines that are well colored and of good quality, even in warm and hot climate regions. Therefore, interest in this variety has increased among growers looking for heat tolerant red wine varieties. Wine made from Marselan grapes grown at the Kearney Agricultural Center in Parlier, California, consistently had relatively good color and flavor and were well accepted by tasters.