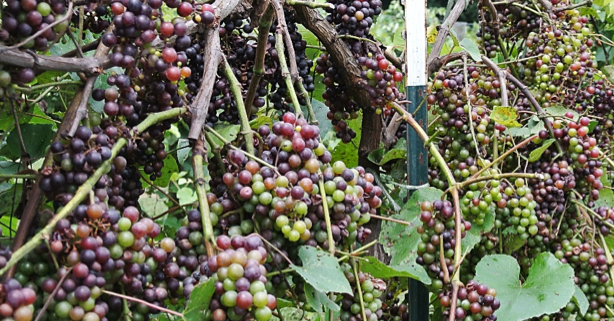 Conquistador is a purple, multi-purpose hybrid bunch grape that was released by the University of Florida in 1983 by J.A. Mortensen. It is recommended for red wine, juice, jelly, u-pick, fresh market, and home gardens. Vines are moderately vigorous and capable of producing high yields when grafted onto a recommended rootstock. Clusters are small and consist of medium sized berries that ripen in mid to late July with a flavor similar to Concord. It has good tolerance to spring frost and diseases such as anthracnose, downy mildew, black rot, ripe rot, and Pierce’s disease. However, it is susceptible to Isariopsis leaf blight.

Conquistador, released by J.A. Mortensen at the University of Florida in 1983, resulted from a 1969 cross between Fla. E 12-59 and Fla. E 11-40 made at the Agricultural Research Center in Leesburg, Florida. It was selected as Fla. L4-33 from a population of 190 seedlings in 1974. Its name was suggested by the Florida Historical Society to honor early explorers. Its lineage consists of Vitis aestivalis ssp. smalliana, Vitis labrusca, Vitis vinifera, and Vitis simpsonii.

Leaves of Conquistador average 18 centimeters long by 17 centimeters wide. They have coarsely serrated edges and do not have deep sinuses. Typically, their adaxial surface is dark green and abaxial surface is light green with moderate pubescence; though, some leaves have a mosaic pattern of light and dark green, which appears to be a genetic trait rather than viral. Stems and petioles contain some color, and tendrils are usually uninterrupted. Budbreak is often late compared to other varieties, which allows for less susceptibility to spring frost. Flowers are self-fertile, and clusters are small and have an average weight of 118 grams, with each purple-colored berry averaging 2.5 grams. Occasional uneven ripening occurs, where unevenly ripened berries appear in clusters and some clusters ripen later than others, but in Florida, yields of 4.4 tons per acre have been achieved. When grown on sandy soils or soils with a pH over 7, grafting on rootstocks, such as Dog Ridge, Florilush, or Tampa, is recommended to achieve consistently high yields.

While more testing could be conducted in other areas where Pierce’s disease is a limiting factor to grape production, Conquistador has been grown in several areas of Florida, especially in USDA cold hardiness zones 8b to 9b. It is typically trained to a bilateral cordon system and spur pruned, and they are planted at a spacing of 10 feet by 12 feet.

Conquistador berries contain seeds and a slip-skin, but they have a flavor resembling Concord and have been given a good taste rating by panelists. Thus, they are recommended for u-pick and fresh market. Though, it is recommended that the fresh berries should be handled carefully and packaged in the vineyard if used for commercial fresh marketing. These berries can also be used to make an acceptable red wine that has good flavor but mediocre color stability, or processed products, such as jelly and juice.