Charbono is an old French wine variety from Savoie where it is known as Corbeau or Douce noir. Currently is is most widely planted in Mendoza and San Juan, Argentina, under the name Bonarda, where it is mostly used for good-value wines. Trialed in the hot climate of the San Joaquin Valley, it produced moderate yields of good quality fruit, confirming its reputation as a heat tolerant variety. Useful clonal differences have been observed, particularly with respect to cluster compactness and ripening time, with FPS 4 being the earliest ripening, and with the least compact clusters. 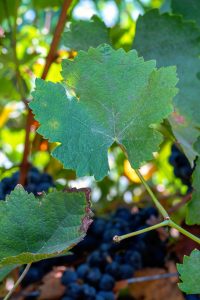 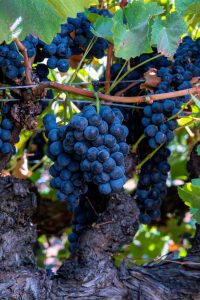 According to Pl@ntgrape, Charbono can be identified by the following traits: young shoot tips have a high density of prostrate hairs, the young leaves are green with bronze spots, the shoots have a ribbed surface, adult leaves are wedge-shaped or pentagonal, with entire margins or with three or five, shallow lateral sinuses, an open U-shaped petiole sinus, small to medium teeth with convex sides, a weak anthocyanin pigmentation of veins, a flat or slightly involute, finely blistered leaf blade, and on the lower side of the leaves, a low density of erect and prostrate hairs. The berries are the round or slightly ellipsoid.

Charbono has medium-sized berries that are round, or slightly ellipsoid, on compact cylindrical clusters, which are prone to bunch rots. However, a comparison of the four selections currently available from Foundation Plant Services at UC Davis (FPS 4, 5, 6, and 7) found that selection 4 had looser clusters which were less prone to rot than the other selections (Table 1) when grown at the UC Kearney Agricultural Center, in Parlier. Selection 4 was also the earliest ripening, and yield decreased substantially if picked late. Conversely, yield of the other selections, which were later ripening, increased with delayed harvest. Fruit chemistry of all Charbono clones was far better than Cabernet Sauvignon grown at the same location, with three to five times higher anthocyanin content, and undetectable levels of pyrazines (Table 2).

Pl@ntrgrape noted that Charbono is fairly vigorous, with a semi-erect bearing. It can be pruned long, although vines at the UC Kearney Agricultural Center were reasonably productive on 2-bud spurs.

In Argentina, Charbono is widely planted in Mendoza and San Juan under the name Bonarda. It is not related to other varieties that go by the name “Bonarda”. In Argentina, Charbono is mostly used for good-value wines (Robinson et al., 2012), though it is capable of producing higher quality. Trials in the San Joaquin Valley have demonstrated it can produce relatively good quality red wine, even in this hot climate region.