M.W. Fidelibus
Synonyms: Foundation Plant Services lists several synonyms for this selection including some which refer to grapes that have been shown (through genetic testing) to be different varieties than this selection. To avoid confusion, they are not repeated here.
Keywords: black, red wine, seeded, spur-prune, and wine

This article describes a selection of Bonarda (FPS 02), a red wine variety available from Foundation Plant Services, at the University of California Davis. A planting at the UC Kearney Agricultural Center, in Parlier, California, a hot-climate region, produced low to moderate yields of fruit from which excellent quality red wines were consistently produced. 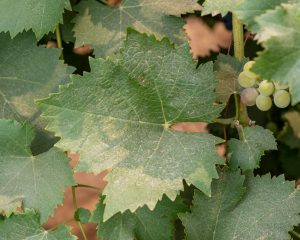 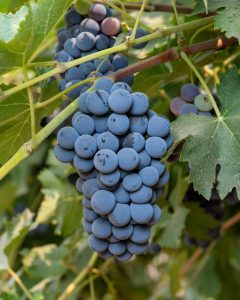 Bonarda FPS 02 was collected from the site of the UC Foothill Experiment Station in 1965, apparently by Drs. Austin Goheen (USDA-ARS) and Curtis Alley (Foundation Plant Materials Service, UC Davis), and planted in the FPS foundation vineyard in 1967 as Bonarda FPS 01. The Foothill station, which was near Jackson, in Amador County, California, was abandoned in 1903, and the grapevine variety trial located there was untended and overgrown. Using maps from UC archives, Goheen and Alley matched the location of the existing vines with maps from the archives as best they could, but Goheen’s account suggests this was difficult, and the origin of the vines used for planting stock was unclear. Further, planting in the first half of the 1900s was often done with “little knowledge of concern for varietal identity”. These factors apparently contributed to the fact that the identity of Bonarda FPS 02 is uncertain. Genetic testing revealed that this selection of Bonarda does not match any other grape varieties having “Bonarda” as a prime name, including Bonarda Piemontese (Syn. Bonarda del Monferrato, Bonarda di Chieri), Croatina, Corbeau (Syn. Charbono), Durasa, Uva Rara, Vespolina, or Zanello. Regardless, in 1982 Bonarda 01 underwent a 170-day heat treatment therapy for disease elimination. Testing confirmed the heat-treatment was successful, and disease-free cuttings were planted in the foundation vineyard in 1989 as Bonarda FPS 02.

Bonarda FPS 02 has low to moderate vigor, with a relatively sparse canopy. Thus, the fruit tends to be somewhat exposed to sunlight, but sunburn was not observed to be a problem during a 5-year trial in the central San Joaquin Valley, a hot-climate region. Clusters are globular, with round to obovoid berries (see Figures 1 and 2). Fruit generally attained 25 Brix by late August (Table 1). Machine pruning delayed harvest by three weeks in one year, and not at all in another year.

Wine made from Bonarda FPS 02 grapes grown at the Kearney Agricultural Center in Parlier, California, consistently had good color and flavor and was well accepted by tasters.